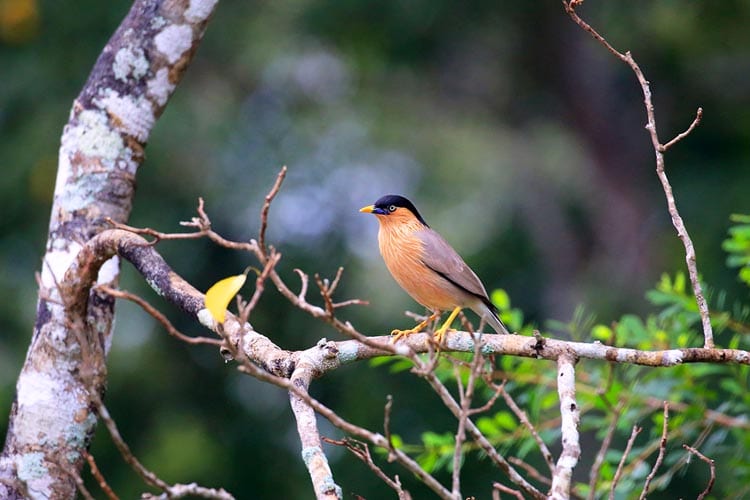 The reasons for a rich diversity of bird species in Sri-Lanka.

Although Sri-Lanka is a small island its diversity of bird species is significantly high.

There are 453 species authentically recorded to date from the country (Warakagoda, et. el., 2012). Sri-Lanka being a tropical island it also possesses high endemic bird diversity. The most recent major ornithological publication on the South Asian region recognizes that 33 species of birds are endemic to the island.

Status of species: The birds of Sri-Lanka can be categorized into three groups based on their occurrence in the country. These are: breeding residents, migrants, and endemics.

Breeding residents: Species which breed and live in the country throughout the year. The endemic species are also breeding residents but are recognized as an important group within them due to their uniqueness, explained below. There are 238 species known to breed in the country to date (Ceylon Bird Club, 2011). However, amongst them there are a few species of whom a small number of individuals are known to breed in Sri-Lanka although the great majority of individuals occur in the country as migrants. Apart from the endemic species all other resident species occur also in the Indian mainland, and some species even occur further north, east and/or west of there.

Migrants: Species those who visit Sri-Lanka annually during the latter part of a year and live for a few months in the country, continuing until the early part of the following year before going back to their breeding grounds. Arrivals of the migrants coming from northern countries to Sri-Lanka start by mid August and their departure commences by April in the following year. These birds migrate to tropical countries like Sri-Lanka in order to escape from the winter in the northern hemisphere. There are also a few species of seabirds which migrate to the coastal water of Sri-Lanka annually from the sub-Antarctic region during May to September at the onset of winter in the southern hemisphere. There are 215 species recorded to date as migrants in Sri-Lanka.

Endemics: Species who live only in Sri-Lanka and are not found no where else in the world. Presently there are 33 species recognized as endemic to Sri-Lanka. Sri-Lanka possesses a high endemic species diversity of birds among countries of the South Asian region. It has been also recognized as one of 218 ‘Endemic Bird Areas’ of the world. The island has been long separated from Indian mainland and thus evolved a significant number of endemic species and sub-species in its bird fauna.

Distribution of Species: Bird species in Sri-Lanka are primarily distributed within its three distinct climatic zones viz. Low-Country Wet, Low-Country Dry, and Hill Zones, which have been created by its climatic and geographical conditions. Some species are restricted to one or two zones while some others are distributed within all three zones. The majority of the endemic bird species are restricted to the Low-Country Wet Zone and the Hill Zone. Different floristic compositions due to climatic conditions, the ocean around the island and man-made alterations to land have resulted in the creation of many different habitat types within the zones in the country. These habitats are the key factors in determining the distribution of the bird species within the zones, according to the species preferred style of living.

Best Things to Do in Sri Lanka